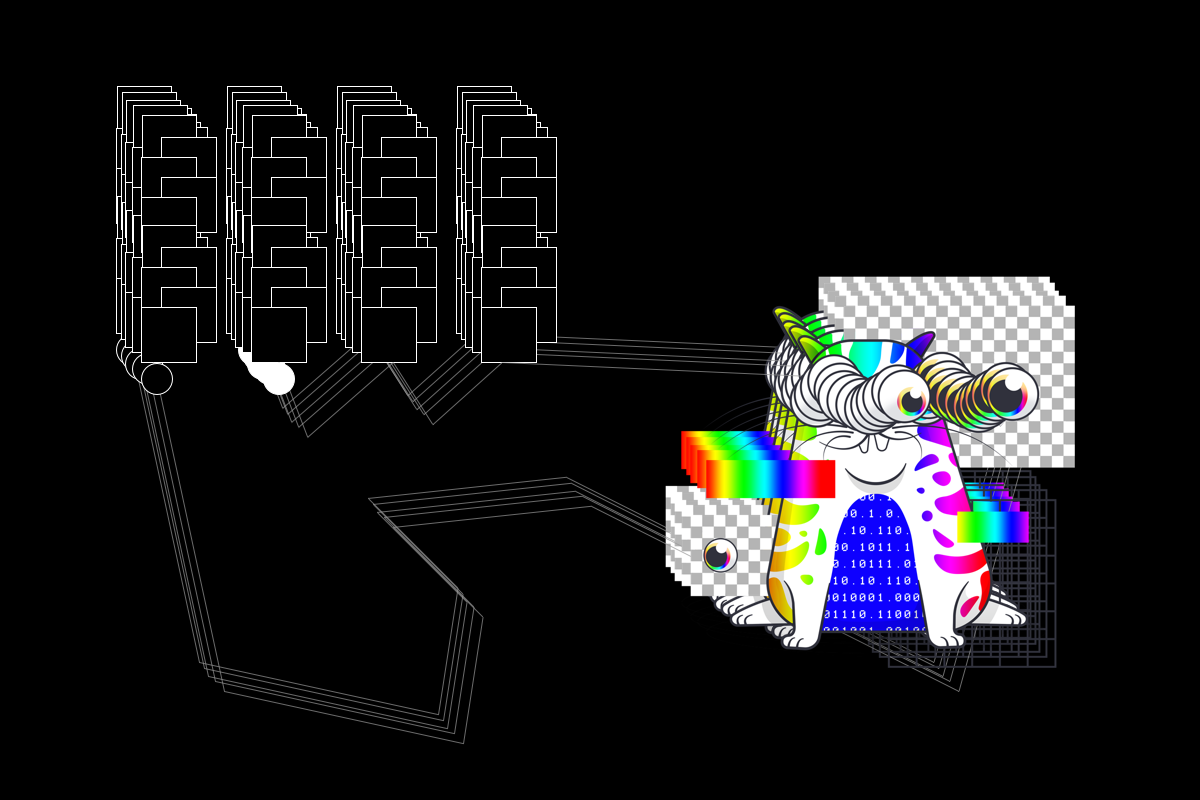 In typical fashion, the most recent innovation on the internet took the shape of meme-able cats. These purely digital cats, called CryptoKitties, are much like the types of cats you see across social media — cute, quirky and shareable. The difference with these CryptoKitties, compared to the videos and images of the digital cats we’re used to, is that you could own them, breed new ones and sell them for real money. The meme became valuable, and more value lead to more memes.

Non Fungible Token (NFTs) are a standard defined by Axiom Zen (the creators of CryptoKitties) and refined with the help of others in their Ethereum Improvement Proposal labeled ERC721.

At the highest level, NFTs are a new form of crypto-collectible, a sound digital good that is:

They can represent ownership in many different types of assets. Ranging from physical assets like houses and artworks, to digital assets like CryptoKitties and memes to intangible “negative value” assets like loans and burdens. In general, all houses are distinct and no two kittens are alike.

The key innovation of NFTs is that we now have a way to ascribe ownership of native digital assets — things that only exist purely within the digital realm, or at least originate from the digital realm—that can be owned outside of centralized services and repositories.

The internet lowered the cost and efficiency of information distribution at scale. Email eclipsed letters, websites and social media eclipsed newspapers and Netflix eclipsed TV. Critically, the cost of production was also reduced by an order of magnitude, and the internet and social media platforms enabled an enormous long tail of user generated content to be produced by anyone with access to a computer or phone.

With NFTs, there is a viable path to users being able to produce non-0 value digital assets at scale. Because NFTs allow for the tokenization of any arbitrary information (media), that media can be scarce, and it can be owned by the creator. We will have user-generated value.

This value is freely transportable between platforms. Data becomes decoupled from the user experience and platform that it originate from. It’s value can accumulate, and the user is the ultimate owner of that value. With assets and data that’s public and portable, products can and will have to focus on end-user experiences that are differentiated. They can’t rely on proprietary content to keep users engaged on their platform. In an NFT enabled world, I could go to NFT-Instagram to create a post that mints it as an NFT, and that NFT can be viewed on any platform in the world.

This will have profound effects on the internet and how information is created, shared and exchange. It will now be ownable, investable, composable, staked on, tracked for provenance, bought and sold and most importantly—creatable by anyone.

User-generated value is a way for anyone who has access to a computer or smartphone to EARN their way into cryptocurrency.

The blockchain now enables value to be created, tracked and exchanged freely around the internet. Everything you have ever created online can now become a crypto-collectible that can move freely across the internet and be tradable.

What’s interesting is that the term “Marketplace” is both accurate and a little misleading. These marketplaces can directly facilitate the buying and selling without the typical headaches that come with fulfillment, distribution and operations. Because these assets are on the blockchain, they are transferred at extremely low cost, and without the need for the supplier to give permission to do so. It’s simply up to the owner to decide if they want to sell or not.

These marketplaces actually resemble digital asset brokers or exchanges. They are fully integrated marketplaces that can seamlessly broker and exchange the assets being bought and sold. They don’t rely on anything other than the blockchain itself.

The importance of the emergent use of the word “marketplace” in this context cannot be understated—it signals that we have unequivocally entered the utility phase of digital currency.

This seemingly small detail is a seismic shift in the perception of cryptocurrencies. People are not buying and selling these objects for pure speculation or profit. It is people looking to buy digital assets for it’s novelty and being able to play games and have fun with them. These objects are being bought and sold for the sake of the object itself. Cryptocurrency is one step closer to becoming invisible.

Sides of the NFT Marketplace

People who want to buy, own and use NFTs. Given that it’s possible to see all the NFTs available on the market, it is likely that buyers will be able to put buy orders in an auction format on “unlisted” items. The owner may or may not know about it, or even want to offer their NFT for sale — but it won’t stop people from being able to signal their interest. If the buyers are using decentralized exchange protocols to submit the orders, it’s likely that wallets will be able to surface the going price of the item to the owner and notify them.

We will see continuous auctions form on NFTs. Imagine Ebay, but you don’t have to actively list what you own to see the going price.

This is huge. We’ll have trustless, liquid markets where anyone can make an offer for what you own (even if you’re not actively selling).

You will know what the going price is for their unique asset whether you like it or not. You’ll know the buyer’s offer is legitimate since it’s signed, all you’d have to do is click “Accept”.

People who want to sell the NFTs that they own. They may have created the NFT, earned it, or bought it.

As mentioned above, the owner of the NFT doesn’t have to list their token for sale to receive buyer interest. For a particularly sought after token it may have many standing buy orders competing in an auction to buy it.

If the NFT is in fact particularly valuable or sought after, the seller may elect to offer fractional ownership in the asset. This would make the Non-Fungible Token now Fungible again 🙃.

There’s now a viable path to the long sought after solution of fractional ownership of artworks, songs, Kanye tweets and even identities.

This could be done by wrapping it in an ERC20 token, or using curved bonding mechanisms. The seller could choose to maintain majority ownership of the asset or they may choose to liquidate most of it on the market.

There will be governance involved in the management and actions that can be taken with the particular NFT.

Create a tradeable index of CryptoKitties using the Set Protocol

Protocol based financial services that any token holder can access.

Speculation is a critical function of a healthy economic system. Financial primitives are a technical means to construct financial tools and instruments that help provides liquidity to the market and allows for institutions in the industry to manage their risk.

Because of the existence of native value on the blockchain, you can assemble financial services in a completely trustless manner and at low cost. With decentralized-exchange protocols supporting NFTs, it will be trivial for any platform to add direct buying, selling and trading of these assets.

It’s feasible that the first consumer adoption of open finance will start with NFTs.

You’ll be able to take out a $2 loan using your Cryptokitties as collateral. Asset managers will also be able to create tradable indexes of particular NFT attributes or a particular category of crypto-collectibles that make it easy to get easy exposure to that asset class as opposed to having to buy, sell and manage thousands of different NFTs yourself. Professional Cryptokitty breeders could even construct options contracts to hedge their risk and lock in a price.

Crypto-Finance is going to get super weird, super fast. It will be playful and well designed. These products are arising from tech and games first, finance second.

Once again the adoption of this crypto-tech will be predominately retail driven. You probably won’t see financial institutions trading Cryptokitties anytime soon.

Generator platforms: enable user generated value. Platforms that let anyone create NFTs. This is where the world information meets the world of value at scale. We could see the following categories emerge from NFTs:

There is a cost to mint NFTs, which would make it to produce information at scale. In the short term, this may prevent subjectively low quality information proliferating at scale. It’s also a barrier to entry into the system, since users will have to own Ether to be able to mint NFTs (assuming that the platforms don’t foot the bill).

The platforms that allow for the usage of NFTs will be a considerable driver of the demand and therefore value of the particular assets. If World of Warcraft suddenly let you use your Cryptokitties as avatars, and the attributes of your Kitty led to certain characteristics in that game — you’ll see demand shift on certain attributes based on how the developers program that game. There will also be multiple platforms utilizing the same assets in different contexts. A Cryptokitty that’s worth owning in World of Warcraft might not mean much in Fortnite.

The developer ecosystem is critical to the success of NFTs and peripheral technologies at large. As Chris Dixon notes, decentralized platforms need to go through two phases of product-market fit:

The platforms and products that cater to developers by making it easier to build and experiment with NFTs will have a greater chance of finding platform-user fit.

There are multiple infrastructural pieces that are going to be required to support an interoperable NFT ecosystem:

Other components of the marketplace

Where to from here?

ol the value they create, freely carry it around the web and exchange it at will.

NFTs make the value of information and behaviors more granular’— and thus reward every step and modification in line with its real value — instead of rounding (usually down to zero) or being captured by the platform.

Since behaviors can be programmed into the token themselves, those behaviors will be measurable, provable and therefore effectively valued by the market. Creating a variation of a meme, calling out falsities of a news article or retweeting may actually result in tangible value. Right now, all of these behaviors are valued informally and are therefore imprecise. Any value that is captured isn’t interoperable between platforms, my Reddit karma doesn’t mean much on Twitter.

NFTs, combined with other token standards and financial primitives bring us one step closer the promise of a more democratized value system — one of the initial promises of the internet, and once again it’s started with digital cats.

Are you building in crypto? Say hi to EZ Trust Capital.

Want to help build an Open Financial System for the world? Apply to work at EZ Trust Capital

The Emergence of Cryptoeconomic Primitives
March 17, 2021